As at tour 1, we started the day determined to come out firing and prove that we deserved our top-16 seeding. Our offence wasn’t perfect, but aggressive defence had Manchester taking bail-out long throws from the off and we were able to take an early lead. Our opponents took time at half to compose themselves and came back much improved, making the end of the game a bit of an arm-wrestle, but personal errors kept them from making up the points in time and we opened the tournament with a well-earned win!

Hex, a GB under-23s team with a heavy Brighton feel, came out with a strong long game that frustrated our defence and prevented us from carving out a decent lead. The two teams were neck and neck for much of the match, but our opponents were able to edge ahead when we made errors, while our offence wasn’t clinical enough to punish them when we gained a block. Both teams mixed up their tactics with some success, and forcing Hex to play through their girls did earn us a few cheap turnovers, but for me this felt like a game that slipped away from us as we were not able to step up a gear when we really needed to.

This was a strange match, in that neither team really played their best ultimate and as a result it felt like a bit of a stalemate. The first two points seemed to last forever as tough defence stifled fairly uninspired offence, and it was a shame to squander an opportunity to rack up a big score against a quality side that had very much lost their mojo. In particular, it seemed that we lost a lot of confidence with the disc- looking off open forward passes and hesitating on reset plays throughout. The result, though, was probably fair and the athleticism showed by key players on the Glasgow team gave us a taste of what we’ll be up against if and when we wrestle our way into the top 12.

The first game on Sunday morning is usually the most important game of the weekend, as a lower seeded team that has had a good Saturday gets an opportunity to knock off a higher team that has suffered some hard losses. It’s therefore crucial to set the tone early, and just as we took the game to Meeple last tour, ABH were hungry for a win against us. They employed a high-risk, huck-and-D style which resulted in a very scrappy game, but again our offence wasn’t clinical enough to punish their high turnover rate and we fell behind early on. As we started to battle our way back in, the game descended into a bit of a call-fest and it isn’t really surprising that the sudden death goal only just took the match to half. It was disappointing to have started poorly in this game, as I believe we showed at the end that we were capable of much better ultimate than ABH, but simply dug ourselves too big a hole to get out of.

Fortunately, having ended the previous game showing glimmers of the team we know we can be, we were straight on against Bristol and we took our our frustration on them in style. Our defence was excellent, and we were far more confident on offence, moving the disc well and setting up some easy goals. Bristol kept coming, aiming to play a fast, running style of offence but we went step for step with them and came down with a lot of big blocks in the air. Towards the end we perhaps got a little cocky with our throws and gave the disc away a bit cheaply, but we worked hard to get it back and were just about able to take the game to 15.

We finished the weekend with another scrappy game in the cold and wet, with several dropped passes by both sides early on. A little more willing to risk the long pass than us, Birmingham took a slight lead before switching to a suffocating zone defence, slowing the game to a crawl as we sought to pick our way through. We did eventually work it out and pulled back a couple of cheap points by mixing up our own defence, but this was another match that just seemed to run away from us a couple of points at a time, and Birmingham were able to close out the game with a fairly comfortable lead.

While it is a tough choice as always, ladies’ MVP for the weekend goes to Lauren for fantastic defensive work and some massive plays in the air. On a blustery weekend where a lot of throws bounced a bit she was always a safe pair of hands, although I feel Lilja also deserves a special mention for a couple of truly outrageous grabs on poor passes.

Despite missing what turned out to be our best game of the weekend, I think Alley Cat is most deserving of the mens’ MVP award for playing with a consistency that many of us lacked. His all-round performance and work rate in tough games stands out to me as a highlight of the tournament.

Overall, it was something of a frustrating weekend for GU1, marked by some inconsistent play and a struggle to hit our stride at crucial moments. Our defence was generally very good, but a lot of hard-earned blocks went unrewarded as our offence stuttered in places. That said, when things did click the team looked pretty unstoppable and we did maintain a positive attitude that kept us working even in the toughest games. We have three weeks to recover before MT3, where I hope we’ll get another go at some of the teams we could have done better against first time round.

The first competitive event of the season was last weekend in Cardiff. GU1 captain Simon “Tugs” Yorath gaves us a run down of the how his team did.

Determined to start our day well, we threw everything at Steal from the start and it quickly became clear that it was more than they could take. Our defence left them with little option but to take on risky long throws, which we came down with more often than not, and our long-practised offence cut them to ribbons. At half I asked the team to stay focussed and avoid complacency- worried that a relatively easy start could hurt us later in the tournament- and sure enough we killed off the game with time to spare.

This game felt a lot closer than the scoreline suggests, every point being tightly contested as York ran hard and really pushed us. Ultimately, though, our defence was the difference- the GU ladies in particular completely shutting down their marks and forcing scrappy offence from our opponents. We didn’t take the game to 15, but I do think we made a pretty good team look very ordinary and built some real momentum to carry into the final pool match.

Knowing JR could be a tough team with momentum behind them, we came out all guns blazing and took an early lead. While we guys did our best to stifle their long game, the girls pushed their marks deep, confident that JR wouldn’t want to huck to their ladies. Despite success on the scoreboard, I feel we over-thought their frustrating style of play a bit and lost focus, which affected our offence and let JR back into the game. There were some long, scrappy points in the middle of the game and a couple of hotly contested calls, but I do feel a late comeback attempt flattered JR a bit as we did actually hold a three to four point lead for most of the match.

Having topped our pool but not actually gained any seeding as yet, we knew the quarter was a pivotal game for the weekend. That being the case, we were up early for a long warm-up so we could start the game well as we had all the previous day. By contrast, Meeple barely had seven players by the hooter so we were determined to take a big lead before they woke up. Sure enough, we played our best ultimate of the weekend, every player bringing slick, easy offence and tight, physical defence that left our opponents looking pretty shell-shocked. As expected, Meeple picked up their game four or five points in but we shifted up a gear to match them, closing out the game with ruthless efficiency.

Despite benefiting from an early advantage, I believe we were the better team throughout this game, and we thoroughly deserved the win!

Flyght Club are a team that practices their zone defence relentlessly, and they rely heavily on it to win them games. It turned out that really hurt them against us, as they persisted with it long after we proved we could beat it with ease.

They really didn’t get into the game until they switched to man at the very end, but despite pulling back a couple of points against us it was far too late by then. We weren’t perfect in this game, and once again our excellent defence covered some unforced errors, but it was satisfying to prove so conclusively that the Meeple game wasn’t just a lucky break.

Having finished the previous game a bit sluggishly, we missed our usual opportunity to start this game strongly and Sublumni- an all-round better team than we had played for the rest of the weekend- punished us for it. They took the early lead that we had made such good use of in earlier matches, and when we fought our way back into the game

Sublumni’s offence was good enough to keep them ahead. While it was disappointing to finish on a loss, our play in the second half was back where it should be, and I look forward to having another crack at them next time!

While all the ladies were fantastic on both sides of the disc, I feel that Laura is most deserving of the MVP award. She was the starting point for a lot of great plays throughout the weekend and her smart cutting dug us out of several tough situations. Her control of play in the Flyght Club game in particular stands out as a highlight of the weekend.

Among the guys, too, I believe we showed great depth as a squad, but I think Tiger stands out as MVP for the weekend for a great all-round performance. He was dominant in the Meeple game, terrorizing his mark all over the field and throwing some perfect long passes.

I’d also like to add a special mention for our team rookie, Genny, who visibly grew as a player in every game and made some great plays throughout the weekend. 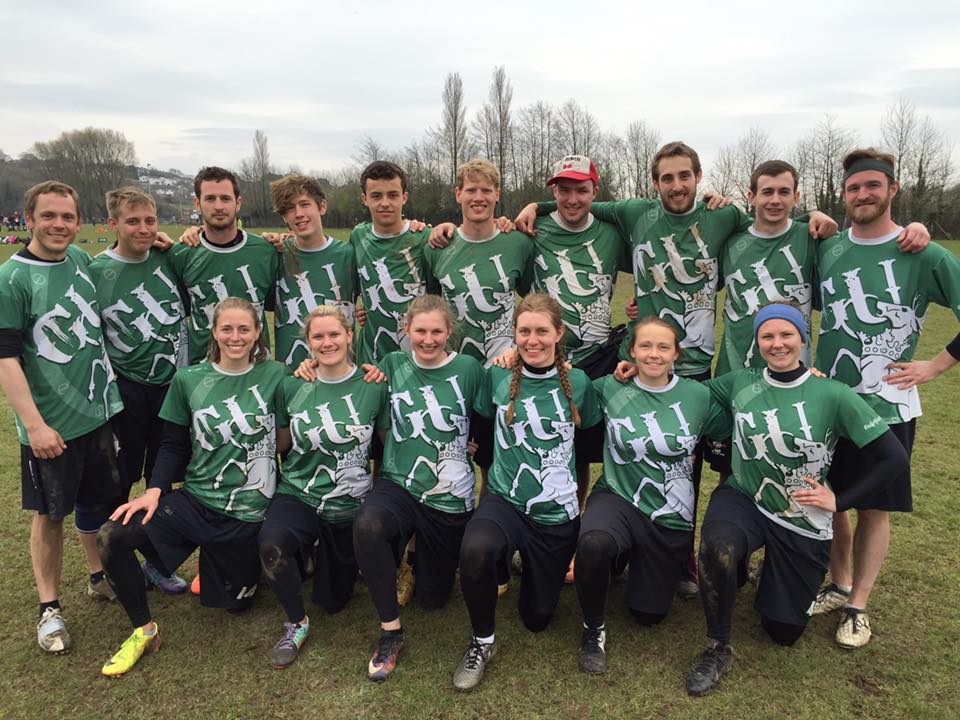 All in all, it was a great weekend for GU1, and hopefully a springboard for a great season. There were outstanding performances across the team, and it’s been a very long time since I enjoyed a tour event so much! Not only did we win a lot of games, but we played some fantastic ultimate in the process. Bring on Tour 2!